2013 is Another Drought Year

During the past Extension winter meeting season I said that the drought of 2012 was in our rear view mirror. I had thought that spring 2013 weather had proven me abundantly correct. But, as corn and soybean plants entered critical seed-filling periods this year, drought returned to some parts of Missouri with a vengeance. Figure 1 presents the weekly rain totals during July and August for five Missouri weather stations. To sustain high yields, corn and soybean crops need at least one inch of rain each week. That 1-inch need is indicate by a line. 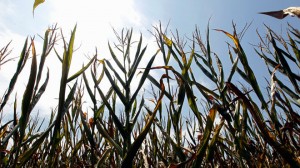 Unfortunately, weekly rain totals did not exceed one inch in Albany and Columbia in any of the 9 weeks presented. At Novelty and St. Joseph, only one of nine weeks at each of these two stations exceeded the 1-inch weekly total. So, corn and soybean fields in central and north Missouri were under drought stress for nearly the entire grain-filling periods. Perhaps more striking is the number of weeks with no rain. At Novelty, 7 of the 9 weeks had less than 0.05 inch of rain.

As central and north Missouri soils dried, parts of southwest Missouri experienced flooding because of heavy rain. The weather station near Lamar recoded over 6.3 inches of rain fall during the last week of July and the first week of August. However, precipitation during the last three weeks of August totaled just 0.01 inch.

Because the zero rain totals are hard to detect on a graph, I converted the data to departures from the 1-inch need. Figure 2 presents these data. Crop yield potential cannot be maintained with these low rainfall amounts. In fact, plant health is greatly affected. It is not surprising that corn and soybean plants are dying early rather than proceeding through normal maturity.

The worse possible weather scenario for corn and soybean yields is a wet spring and dry summer. Figure 3 presents Columbia weekly rain totals from the first week of April through the last week of August. Large amounts of rain in April and May delayed corn and soybean planting. That planting delay had reduced our yield potentials. Wet springs also mean greater opportunities for root diseases and increased chances of soil compaction. Reduced root health makes the impact from summer drought worse because roots are less capable of extracting water from soil.

As drought first began in Missouri, its effects were easily overlooked. Cool day and night temperatures up until mid-August reduced water evaporation. Visible symptoms of drought stress were not often apparent. When abnormally hot temperatures occurred in late August (and again in September), plants had already removed most the available water stored in soils. The warm temperatures were accompanied with bright sun and low humidity. This combined to increase transpiration from plant leaves and increased water demand. Soils in much of Missouri could not provide water, so crop plants quickly exhibited drought stress.

Yield potentials rapidly declined during late August and continue to be impacted. Last year, a hurricane saved soybean yield in at many Missouri fields. That help will not arrive in 2013. Late planted corn and soybean fields are will suffer the most damage. Unfortunately, the wet spring caused many fields to be planted late. Because drought stress occurred during mid to late summer, the yield component affected most will be seed size. Small corn kernels result in low test weights. Small soybean seeds may not affect test weight, but clearly reduce yields.

Previous: Save Yield by Scouting for Stalk Rot
Next: U.S. Farm Economy Poised to Decline