Crop yields are easily overestimated when dry weather hits in July. The kernel count is there, but without rain the corn doesn’t fill. 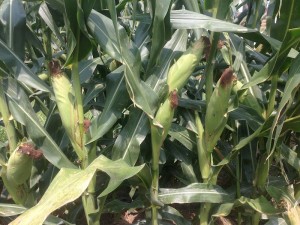 “I don’t want to be Doctor Doom, but you must be cautious in estimating yields on how the crop looks now.”

Above average rains fell in June across Missouri. That was followed by dry weather in July. Spotty rains left some areas with less than an inch of water. A strong start led to vigorous growth with lots of leaves.

“The crop looks good,” the MU Extension specialist said in a weekly teleconference. “When weather turns dry, too much vegetation hurts.”

“Corn needs rain in July. Three-quarters of an inch won’t do it, no matter how deep your soils,” Wiebold said. “If forecasts for rain come true, this warning can be forgotten.”

Brent Myers, MU corn specialist, said 80 percent of the Missouri corn crop is at dough stage, the kernel filling time. “Once, kernels reach this stage, yield can increase 80 percent,” Myers said. “That is, if water is present.”

“Don’t shut off the irrigation,” Myers said. By this time of year, all kernels will be in place, but they won’t increase in size without water.

It is kernel count and then kernel size that determine yields. Size is still in doubt.

Mid-August temperature forecasts are moderate, not above normal.

Wiebold noted that even in cool weather, there is evaporation. “It just takes longer to empty the bank account,” he said.

“July rain is critical for corn. No rain then can cause permanent damage,” Wiebold said. “For the soybean crops, August rain determines yields.”

The crop planted after wheat harvest just didn’t start. “Few people plant double crop now,” he added. “But for those who do, it’s devastating.”

“We were headed to extremely large yields,” Wiebold said. “If lack of rain cut yields 10 percent, Missouri farmers can still have record crops – if we get rains now.”

Myers said studies of corn development show lots of variation late in the season. Rain after dough stage can add a lot to dry matter.

“There are a lot of days left for kernel fill, if we get the rain.”

“There are so many ways to make a mistake in soybean estimates.” The best clue on lower yield is if you see leaves dying, he said.