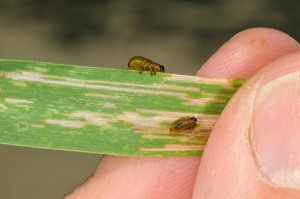 Wheat growers should scout fields for the beetle, said Wayne Bailey, University of Missouri Extension entomologist. The threshold amount is one larva per stem. Infestation can be spotty, so Bailey recommends checking individual fields regularly.

Larvae hinder photosynthesis in wheat by stripping the chlorophyll-filled green tissue between veins on the flag leaf, the last leaf to emerge from the whorl. Leaves appear to have white striping after being stripped. Severely infested fields may look like they are frost-covered.

Larvae are white or yellow, and have a black head and six small legs. They throw slimy fecal material over their back to deter predators. As a result, they may appear to be black, rather than yellow or white.

After walking in infested fields, farmers may find their clothing is spotted with material that looks like bird droppings.

Usually, the cereal leaf beetle appears after a dry spring, but that is not the case this year, Bailey said. The beetle first appeared in Missouri in 1972 and usually is more prevalent in northern states.

Bailey recommends frequent scouting of fields, and insecticide use if yield loss warrants the cost of product and application.

2014-06-16
Steve Krause
Share !
Previous: A Look at Our Crop Progress
Next: Missouri Winter Wheat Production Expected to be Down 21 Percent from Year Ago