The U.S. Department of Agriculture predicts the nation’s farmers will deliver a record 3.42 billion bushels of soybeans this year. The USDA is also forecasting that this year for the first time Brazil will overtake the United States as the world’s leading producer of soybeans. That means the pressure is on American soybean farmers like Brian Flatt, 41, to eke out even more soybeans from his fields.

“It’s all got to be healthy and the healthier it is, the more yield we can get, which usually translates into more money in our pocket but more food in the consumer’s mouth,” said Flatt, who grows soybeans on 2,500 acres in Thompson, Mo. with his 65-year-old father, Ron.

In the past several decades, there’s been gradual improvement in soybean yields, which is the output a farmer gets from his or her land. In 2012, American farmers brought in 39.6 bushels of soybeans per acre, according to the USDA, compared to 31.5 bushels per acre in 1982. But increased demand from China along with competition from Brazil are keeping scientists and farmers focused on how to maximize their yields. And a recent breakthrough in soybean science may provide some much-needed answers. 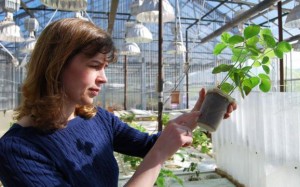 “It’s amazing to see the explosion that’s gone on in the plant world,” said Jeremy Schmutz, a plant genomicist at the U.S. Department of Energy Joint Genome Institute in California and the HudsonAlpha Institute for Biotechnology in Alabama.

Schmutz said the soybean genome sequence was shared with scientists across the country, which created something of an explosion in soybean science.

“Before it was so difficult to do experiments and so difficult from the genomic side to figure out what we were doing. These became extremely large projects. And now various smaller groups can pick up and do various aspects of these projects as long as they have the basic resources they need,” he said.

A team at the University of Missouri led by plant scientist Melissa Mitchum is among the groups exploring the soybean genome sequence. Along with researchers at Southern Illinois University, Mitchum’s team uncovered a previously unknown gene that is resistant to the soybean cyst nematode, which feeds on the roots of farmers’ soybeans. They cloned the gene and hope to one day breed it into a high-yielding soybean variety that will be resistant to soybean cyst nematode.

The microscopic worm, according to Mitchum, costs American farmers nearly $1 billion in lost yields each year.

“This identification of soybean genes for resistance to soybean cyst nematode is sort of like one of the breakthroughs in the human disease field, you know, cloning a gene for Parkinson’s or Alzheimer’s. The only difference here? We’re in soybean plant. But here we’ve cloned a gene that confers resistance to the major pathogen of soybean,” she said.

The National Science Foundation, the USDA’s National Institute of Food and Agriculture and the Missouri Soybean Merchandising Council funded Mitchum’s research. The United Soybean Board also contributed funds through check-off dollars, which are monies the board gets from the sale of farmers’ soybeans.

“Anything we can do — especially controlling the cysts — will help us improve our yields,” said Delbert Christensen, who has a 1,000-acre farm near Audubon, Iowa and sits on the United Soybean Board. “And the need for protein throughout the world just is ever increasing and we need to do everything we can to help improve the yields and put more protein into a world market.”

Other universities are making significant breakthroughs in soybean science. The University of Wisconsin, for example, also has cloned a soybean cyst nematode resistance gene. The University of Purdue has identified two soybean genes resistant to another pathogen detrimental to soybean fields: Phytophthora root and stem rot.

“If we can unlock some of these possibilities that are available in the genetics of these crops we work with, we’re essentially making better use of the land that’s in production and reducing the demand on additional land, additional water, additional resources that might have to go into that crop,” said Scott Erickson, head of the company’s soybean seed management group for North America.

Soybean farmers like Ron Flatt in Thompson, Mo., are eager to see this research translate to their fields.

“The technology is changing and one of the reasons it has to is because of the world population. And demand for food … down the road, it’s increasing every day and so we’re going to have this increased production,” he said.

But maximizing soybean yields may need to happen sooner rather than later. New research from the University of Minnesota indicates that even the current growth in crop yields will be insufficient to feed the world by 2050.