This year’s record-breaking rain and continued wet weather has led to serious problems in wheat fields. 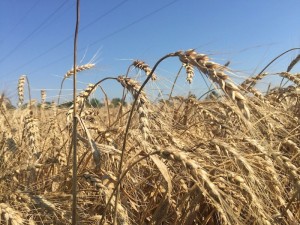 Farmers have had a tough time harvesting the wheat crop in the first place, and now disease is making it hard or even impossible to sell, says Pat Westhoff, director of the Food and Agricultural Policy Research Institute (FAPRI) at the University of Missouri.

The Wheat Belt has been hit by vomitoxin, a common name for the mycotoxin deoxynivalenol. The Food and Drug Administration has restricted the concentration to 1 part per million for human food products. In higher concentrations, vomitoxin causes feed refusal and poor weight gain in some livestock. Much of the affected wheat has levels high enough that grain elevators won’t accept it.

Making things is the large global wheat crop, which has kept prices lower than producers might have hoped, Westhoff says.

“We don’t quite have a record crop in terms of production level, but there is a lot of carryover from last year’s crop still out there,” he says. “Currently USDA projects that by the end of this marketing year we’ll actually have more wheat in storage globally than we had at the start of the year.”

With large global stocks, consumers shouldn’t see an increase in the prices of wheat products, he says.

“After a very bad experience in 2015, I suspect there will be some producers who may not be as excited about planting wheat for next year’s harvest,” Westhoff says.