Farming? There’s an App for That!

Smartphone apps aren’t just for social networking or entertainment. A growing number of apps make use of smartphone technology to help farmers do their job. 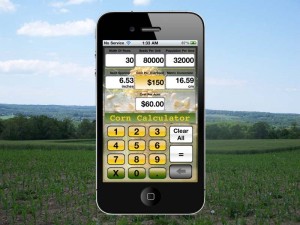 Farmers can use apps on smartphones or tablet computers for everything from staying up to date on agriculture news to calculating sprayer tank mix ratios, said Kent Shannon, University of Missouri Extension natural resource engineering specialist.

“In the area of precision agriculture are apps that we can collect geo-reference GPS data from,” Shannon said. “That allows us to do a better job of recording things in the field.”

One example is Connected Farm, which lets producers collect scouting information in the field and take pictures that are geo-referenced. There are also several apps that have commodity market information.

“By having information right there at your fingertips, you don’t have to go back to the office and get on a computer,” Shannon said. “You can make decisions right there in the cab of the tractor or combine.”

And this is only the beginning, Shannon says. New and more powerful farm-related apps are being developed all the time as smartphone usage expands and technology evolves.

Shannon says producers will be able to use a tablet or smartphone to access diagnostic information on their equipment, anything from oil levels to hours run, allowing them to perform more timely maintenance.

Before jumping head first into mobile technology, there are some important things to consider.

Perhaps the most important one is wireless coverage in your area. Reliability of phone service and speed of Internet connections can vary greatly by location and provider.

Though the latest high-end devices tend to be pricey, Shannon says that in today’s marketplace you can get a smartphone pretty inexpensively.

“Your data plan is going to be a data plan no matter what kind of a phone you have,” Shannon said. “But the maturity of the market has allowed us in some instances to get a phone free as part of your contract.”

Shannon notes that a lot of available apps are free. “Just try it,” Shannon said. “If it is a free app, it doesn’t cost you anything to try it. You can always delete it off your device, but you can see what the app offers.”

Previous: Demand Prospects for Old- and New-Crop Soybeans
Next: Corn in U.S. Seen by Cordonnier at Risk of Damage From Frost