A group of Arizona growers were like ‘kids in a toy store’ last fall during a precision agriculture remote helicopter field demonstration at a cotton field.

The growers watched as Jared Siegler placed video-display goggles over his eyes, picked up a remote controller-transmitter, and guided a quadcopter outfitted with two cameras across a cotton field searching for crop problems.

“The GeoBlu Explorer allows you to aerially survey a field or block quickly for signs of problems,” Siegler says, “including pest and disease issues, weeds, crop stress levels, water and fertility variation, and more.” 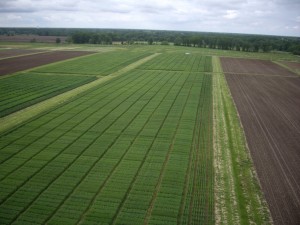 Siegler owns GeoBlu Services based in Phoenix, Ariz. Information collected by an UAV, he says, is sufficient to write a ‘prescription’ for crop protection products.

“The GeoBlu Explorer is less expensive and easier than hiring a commercial flying service to survey fields, and perhaps is more effective than scouting a field by foot or truck,” he says.

For the grape industry, Siegler says the UAV can serve as a crop assessment tool in hilly areas where walking steep hillsides can be difficult and dangerous.

“Now there is a precision ag tool which can make the job much safer,” says Siegler.

The inventor stopped short of calling the UAV a ‘drone.’ Public perception sometimes ties drones to aircraft which carry missiles or other weapons which is not the case with Siegler’s UAV.

Here’s how the GeoBlu Explorer works. The UAV is outfitted with four motors and can take off from the side of a field. It flies over the crop as low or high as desired. The two on-board cameras capture imagery data which can be viewed real time onsite with video display goggles or a ground-station monitor, or later for off-site viewing.

The data is recorded on a SD card which can be downloaded to create prescription field maps. The grower or consultant can make knowledgeable decisions based on the data findings.

The GeoBlu Explorer is gaining popularity in agricultural circles. It was selected as a Top-10 New Product during the 2014 World Ag Expo in Tulare, Calif. in February.

The GeoBlu Explorer is also an option for livestock producers. It can provide cattle head counts by air and monitor animal behavior.

The UAV could be a good fit for the insurance industry, including insurance tied to agriculture. The helicopter’s ‘bird’s eye view’ could accurately assess crop damage after a major weather event – drought, flood, or tornado, for example. If the producer has insurance, the UAV data could help insurance companies more accurately determine claims.

In Arizona alone, the GeoBlu Explorer has gathered information on cotton, corn, citrus, and other crops. The gathered data has directed growers and crop consultants to apply more water to crops and apply needed herbicide treatments.

During a University of Arizona Cooperative Extension field day, discussion focused on stinkbug damage in a field of Upland cotton near harvest. Extension staff scouted the field for pests. The GeoBlu Explorer flew overhead to glean information to help the grower make good management decisions.

Perhaps one of the questions about flying a remote helicopter over a large field is what if there is a loss of signal to the unit – how could you bring it back? A ‘return home’ function built into the unit directs the UAV back to the operator’s ‘home position’ to land.

In addition, the UAV can upload GPS or Google Earth data to compute flight path coordinates and automatic flight routes. The operator can enter specific routes, speeds, altitudes, and hover when needed.

Bird in the box

The base price of the GeoBlu Explorer system is $2,799.

The live-view goggles are a $599 option. Another add-on option ($349) allows the user to fly the UAV with an IOS or Apple interface. Basically, the user can operate the quadcopter with an iPhone or iPad, create a pre-determined flight path (waypoint navigation), and even edit the flight path ‘on the fly.’

Siegler says learning to fly UAV is fairly easy. It is similar to playing video games with a controller.

If you are not a ‘video gamer,’ Siegler includes a small-‘trainer’ UAV in the base package, plus a learning guide. You can basically learn how to fly it in your home.

“Learning to fly the UAV is like learning a golf swing,” Siegler claims. “It’s all muscle memory and hand-eye coordination. The trainer UAV helps with that.”

A suggestion – protect the valuables in the living room before you start.

2014-04-14
Derek Fox
Share !
Previous: Biologicals Q and A – What kind of research is being done on Biologicals?
Next: Corn Seed Treating on The Research Farm