Farmers who don’t like USDA’s market-moving reports have gotten their wish, at least temporarily. The shutdown of the federal government stopped the flow of data from the agency, leaving traders with fewer facts about both supply and demand.

Corn and soybean growers wished the agency’s reports good riddance, after USDA’s swan song was a bearish tune. The Grain Stocks tally released Sept. 30 on the eve of the shutdown showed bigger than expected increases in old crop carryout for both crops.

The soybean number provided just the sort of bearish surprise farmers love to hate. The agency said the 2012 crop was bigger than previous estimates by 19 million bushels, increasing Sept. 1 stocks by 16 million. Futures broke 50 cents over the next two days before stabilizing.

For corn, USDA put Sept. 1 stocks at 824 million bushels, up 163 million from the agency’s last estimate. With usage for exports and ethanol fairly well known, the increase suggested much less corn was fed to livestock during the summer than anticipated. Fewer cattle were in feedlots, whose operators turned to wheat rather than use high-priced corn.

Indeed, the government’s estimate of Sept. 1 wheat stocks fell due to that increase in feed usage, which helped offset an overall increase in production for 2013. But the agency’s individual breakdowns by class showed some substantial changes. All classes increased except hard red winter wheat, which dropped by 47 million bushels. Coupled with red-hot demand for bread wheat, the change could lower stocks of the class to one of the tightest levels on record.

Wheat prices extended their September rally on the news, led by Kansas City futures, which increased their premium to Chicago by 20 cents a bushel and traded over Minneapolis for the first time since 2010.

The reports underscored how much traders depend on USDA for data. This dependency has probably grown in recent years, as analysts and traders without much if any background in agriculture entered futures markets that emerged into the mainstream of international investment. Without news about crop ratings, export sales, and in some cases prices, analysts updated projections with more than the usual amount of trepidation. Some traders just headed to the sidelines, exiting positions rather than fly blindly. 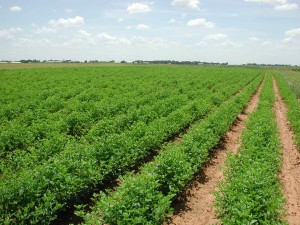 The result was a market that emphasized true hedgers: end users looking for bargains and farmers selling grain on their own or to elevators that laid of their risk with futures. For many growers, that’s the type of market they’ve wanted. Now the question is whether they’ll find out about the adage, “be careful what you wish for.”

Corn prices broke on the heels of the stocks report and harvest pressure from what looks like a record crop. The December 2013 futures contract slipped to its lowest level in more than three years, and downside chart objectives remained around $4.26.

Unless the deadlock in Washington ends soon, USDA is unlikely to put out its Oct. 11 production, supply and demand report on time. Nonetheless, wire services queried analysts for their estimates as usual, which may be all the market has to trade for a while. Farm Futures sees a crop of around 13.7 billion bushels, an all-time record. While harvested acreage may be lower than USDA projected in June, the reduction may be less than many though possible, falling by only 1 million or so. Lack of a killing frost gave some fields time to mature that farmers originally thought would be cut for silage, with better weather also boosting yield potential.

Ending stocks could more than double to 1.7 billion bushels, keeping rally potential subdued. Harvest futures lows in the low $4 range are possible, enough to give growers who bought up coverage a payoff from Revenue Protection crop insurance.

Remember, though, that safety net ends Oct. 31, and weak prices into December delivery can’t be ruled out. While livestock feeding and ethanol usage should recover somewhat, exports could struggle. U.S. corn is priced as much as $1.50 above originations out of the Black Sea to some of our best customers, who are still buying Brazilian corn as well. Output from South America should be down when combines roll there in 2014, but barring a weather disaster end users should still have plenty of grain to pick from.

Basis strengthening should offset some of the risk of falling futures, but be sure to figure out now how much downside you can afford. Selling deferred call options to cover some of your inventory, or hedging it for basis gains with futures or hedge-to-arrive contracts may be more prudent that stubbornly locking your bins at harvest.

Soybeans don’t confront fundamentals that are markedly bearish as harvest gathers steam. But my selling targets for 2013 soybeans were already met on the early September rally that stalled out at $14. Getting futures back to that level won’t be easy, without concerns about South America growing conditions or smaller than expected production in the U.S.

Of course, that projection depends on strong demand, but record early season export sales should provide good momentum. Chinese imports could grow substantially over the next year, after weaker economic growth there restricted purchases.

Still, long-term storage of soybeans could be risky. Deferred 2013 crop futures from March through August are still trading at a sizeable discount to November and January, as the market anticipates a big South American crop will lower prices. Waiting for basis to rebound into December, and selling rallies with futures or hedge to arrive contracts looks advisable on at least 50% of any inventory.

Wheat prices struggled and struggled after harvest, but finally turned higher in September, fulfilling some of the market’s promise. But with corn and perhaps soybeans foundering this fall, the upside isn’t unlimited for wheat unless the stars really align for bulls.

Kansas City futures already moved 75 cents off lows, taking December into overbought territory. Rewarding the rally to move some inventory is a good idea, as well as starting to sell 2014 bushels that aren’t covered by Revenue Protection crop insurance. Selling Kansas City or Chicago futures for a premium to their RP base price keeps the upside open.

U.S. soft wheat remains priced out of key markets in the Middle East and North Africa, and China has stopped buying for now. Supplies should build modestly in 2014, keeping the class a follower as long as growers are able to seed winter wheat after a delayed fall harvest.

Conditions for hard red winter wheat are mixed, but better than a year ago. Weather is always a wild card on the Plains and the same looks true elsewhere around the world. Seedings could be down 20% to 30% out of some key Black Sea exporters due to wet conditions that delayed planting. Argentina is also dry, with reduced acreage as well. Rains improved potential in parts of southern Australia, but some fields in the northeast are too dry, reducing potential for prime hard wheat production there.

2013-10-11
William J. Cook
Share !
Previous: Taking Nitrogen Technology to the Next Level
Next: BigYield.us Reaches 30 Countries in Just Over 60 Days