A Purdue University study shows that high-yielding, modern corn hybrids take up not only more nitrogen from soil but more micronutrients such as zinc, iron, manganese and copper. Nitrogen fertilizer rates also influence how much of these nutrients are stored in the grain at harvest.

Growers may need to use fertilizers to meet the increased micronutrient requirements of hybrid corn in high-yield systems, especially if soil nutrient levels are too low.

“This study raises the question of whether we need to pay more attention to micronutrients in fertilizer management,” said Tony Vyn, Purdue professor of agronomy and co-author of the study. “In high-yield systems, it’s not just that corn requires more macronutrients like nitrogen and phosphorus – which is what farmers normally think about – more micronutrients are needed as well. If you have soil that is deficient in micronutrients, you could be limiting your yields.” 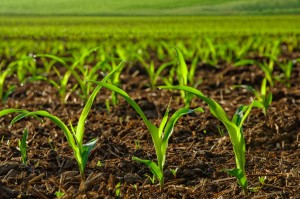 Though micronutrients are essential for optimum plant growth and reproductive development, current management practices rarely take them into account, as growers often assume that soil nutrient concentrations for these nutrients are adequate. But in modern crop production systems, deficiencies could occur, Vyn said.

“For many years, we didn’t have to worry about micronutrients,” he said. “But if you’re in a cash crop situation where you’re producing bigger plants and more grain, you are exporting more micronutrients away from the field at harvest. If you’re not replacing them, the soil is going to be depleted over time.”

Soil factors such as pH and moisture can also influence micronutrient availability, said Ignacio Ciampitti, co-author of the study and assistant professor at Kansas State University.

In the second part of a study on how modern corn hybrids (post-1990) absorb and allocate nutrients under contemporary management practices, Vyn and Ciampitti measured how simultaneous increases in the number of plants per acre and nitrogen rates affected the concentration of zinc, copper, iron and manganese in two hybrids of corn.

“From a human nutrition viewpoint, there’s always a concern that increasing yields will dilute the nutritional quality of corn,” Vyn said. “But as long as soil concentrations of nutrients are sufficient, higher yields tend to mean more micronutrients are concentrated in the grain, not less.”

“Growers are not used to thinking about how much zinc leaves the field when they harvest grain corn,” Vyn said. “But that’s part of the management equation that has to be considered.”

At high plant density (42,000 plants per acre) and high nitrogen rates (200 pounds per acre), 58 percent of zinc taken up by corn hybrids was removed in the grain, compared with 31 percent of copper, 18 percent of iron and 15 percent of manganese.

Vyn and Ciampitti also observed differences in when micronutrients are absorbed and where they are stored in the corn plant. Zinc is taken up throughout the season and is primarily stored in the stems during the vegetative stage, while iron is allocated to the leaves. Copper and manganese are distributed to both leaves and stems and are taken up mostly before the flowering period.

To prevent deficiencies, Vyn suggests growers add zinc to bulk fertilizer with phosphorus – which has a similar uptake pattern – or put it in a starter, while manganese can be supplied in a foliar application where necessary. Growers usually can rely on soil for sufficient levels of iron and copper, he said.

Further research will concentrate on developing estimates for micronutrient requirements to help inform growers which kinds of fertilizers to apply and when.

“There’s no question that when you have more biomass and higher grain yields, you require more of certain micronutrients,” Vyn said. “It’s something to be aware of.”

Funding for the study was provided by Dow AgroSciences, the U.S. Department of Agriculture, the Purdue Bilsland Dissertation Fellowship, Potash Corp. and The Mosaic Co.

2013-11-02
Kent Kauffman
Share !
Previous: This Years Wheat Crop and Harvest
Next: Harvest Almost Done, Yields “All Over the Place”