New Wheat Crop in the Works

This Kansas field could be a small step toward a big leap forward in agriculture.

Researchers from the non-profit research organisation the Land Institute are working to turn this wheatgrass into a viable crop to replace the standard wheat now grown to make bread across the world.

Compared with traditional wheat, wheatgrass has one key advantage: it’s a perennial.

That means the same plant grows year after year, unlike annuals, which have to be freshly planted.

The top grain crops worldwide are annuals and farmers use a lot of fertilisers to get the plants to grow and produce.

Too much or too little water, extreme cold or heat and an array of pests can destroy a crop.

“Ten thousand years ago, when we started agriculture, why, we had to tear up nature’s ecosystem in order to get the grains, the seedbed to germinate. Well, what we’re saying is that’s the beginning of the idea that nature is to be subdued or ignored,” says Wes Jackson, the president of the Land Institute. 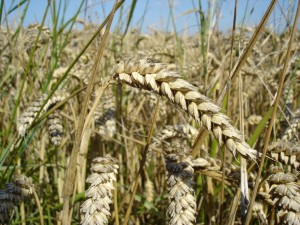 Land Institute scientists say the first farmers chose to grow annuals, despite their shortcomings, because they had higher yields and the early farmers weren’t able to develop perennial grains.

With an annual crop, one growing season brings food. Perennials take longer – more like a slow investment that brings wealth over time.

Early civilisations couldn’t afford to wait for food: they needed it straight away.

But turning the perennial wheatgrass into a viable crop is a pretty tough problem.

Wheatgrass grows too tall, so it can’t support the heavy seed heads of traditional wheat, and the gluten content of wheatgrass pales in comparison to the wheat most farmers grow.

So researchers at the Kansas site are pushing perennials to catch up to – and surpass – annuals. They use selective breeding – but no genetic modification.

One of the key perennial traits they’re seeking is a robust and extensive root system.

As they wash away the soil and gravel from the roots of one variety of wheatgrass, it becomes clear that the roots make up the vast majority of the plant.

Crops with roots like these not only can weather dry spells or extreme heat and cold, but they actually protect the farmland itself.

“With the perennial root system, they’re there year round so you don’t have ground that’s torn up and subject to the forces of wind and rain. And you get erosion. And there are two tacks, one is domesticating some wild perennial candidates and the other is crossing wild perennials with domestic grains,” says Jackson.

The institute has one experimental variety – Kernza – that is already being grown by farmers and used to make flour and brew beer.

But, it’s not quite ready to replace the standard winter wheat or other varieties farmed by hundreds of millions of tons.

Land Institute researchers say using perennials is only part of the solution to fixing what they consider the problems with monoculture farming with heavy use of chemicals to fertilise the soil and kill pests as well as intensive use of energy to till, plant and harvest.

They want to mimic the prairies of the Great Plains – by building domestic prairies where a variety of plants live side by side.

Some fix nitrogen in the soil, which then helps other plants grow. A variety of plant species also makes pests less destructive.

If scientists like Jackson are right, planting crops like this will protect the land, which he says is critical to our survival.

“If you imagine the periodic chart of the elements that we see in our chemistry classrooms. In the upper third of that chart are 20-some elements that go into life. There are only four of those in the atmospheric commons. The other 20-some are in that soil, the stuff of which we’re made. And so, soil is more important than oil and as much of a non-renewable resource as oil.”

The traditional wheat farm has seemingly endless fields of grain.

Only one plant grows in these fields, and often, it’s bioengineered by a giant agriculture company.

Seed is expensive and requires fertiliser, herbicides and pesticides to keep unwanted plants and bugs from spoiling the harvest.

Fields need to be seeded every season.

Though no-till farming is becoming more common, which cuts the massive erosion problems of the past, there are no long plant roots to hold the soil together once the plants are harvested.

On top of that, the Land Institute says no-till farming requires heavy chemical use to control weeds.

Gary Melander has been farming this area for decades. He’s grown some of the Land Institute’s experimental varieties and also done pilot harvesting of poly-culture fields.

Though none of the Land Institute’s crops is ready to replace the wheat he farms, Melander is intrigued by the idea of not having to buy seed year after year and cutting down the use of chemicals.

“The potential is there, and it’s exciting. If we can have a perennial crop, avoid tillage. And this crop appears right now like it’s going to do its own weed control. If we can save our field and save chemicals, it’s going to be a win-win situation,” he says.

Its scientists are working to develop plants for food, fuel, fibre and medicine without hurting the environment.

Principle Investigator Tom Brutnell is the director of the Enterprise Institute for Renewable Fuels at the centre.

He is working to turn the grass variety Setaria viridis into a stepping stone for better biofuels.

He says population growth, a greater demand for grain-fed meat and shifting weather patterns are putting pressure on the food supply.

Brutnell sees value in the Land Institute’s approach, but says the pressures on our food supply needs faster action.

“It’s great what the Land Institute is doing. And, I think there may be some room for developing some perennial crops. Certainly, some of the perennial wheat looks very promising. But, it’s still a long way out.”

At the Danforth Center, researchers use genetic modification to speed up the development of plants to feed or fuel the world.

“Pretty much wherever you turn, there’s increasing pressure, whether it’s the weather or it’s population growth or economic development. And, we don’t really have the luxury to pick and choose technologies or limit ourselves to technologies that are based on fear rather than science. And, we see the genetically modified organisms as a very powerful tool, coupled with breeding, coupled with selection to really improve crop productivity,” says Brutnell.

But genetically modified crops remain controversial, with some environmental groups arguing that their effects on ecosystems are difficult to predict.

In 2013, flooding across the US damaged crops. Corn belt states in the Midwest, such as Missouri, were hit.

But a drought in 2012 in the same area meant a corn harvest yielded about 25 percent lower than predicted.

It’s pressures such as these that are leading today’s scientists to try to reverse a choice made thousands of years ago on the kinds of plants we grow in our fields.