News Update!
Home » Ag News » Rain Brings Hope to Some While Others Persist in Drought

Rain Brings Hope to Some While Others Persist in Drought

I drove home from Commerce, Texas, last Monday in a driving rain. I don’t recall as long as a five-minute respite from rainfall during the two-hour trip. At times the rain was windshield-wiper-at-full-blast heavy.

This particular rain event followed at least two other recent ones, each featuring some hard rain and one splashing down as much as 6 inches on the Dallas area (Denton’s official total was just a tad over half an inch.). Some North Texas locations received even more, up to 8 inches, I’ve heard.

One would hope such rain bounty would come with the shattering sound of the prolonged drought breaking into silvery droplets of much-needed precipitation. The Dallas area meteorologist, however, dried up any such notion. Lake levels, he reported, if they shifted at all, inched up no more than about 3 notches. Many stayed put.

And that was the good news. 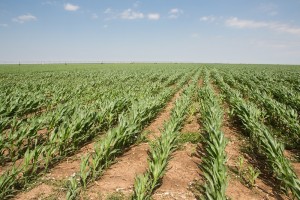 The latest Drought Monitor shows 83 percent of Texas now in drought, ranging from moderate to exceptional. Oklahoma is not much, if any, better.

Following last week’s rain, Randy Boman, Oklahoma’s state Extension cotton leader, said the Altus area received about an inch. That was cause for celebration and totaled considerably more rain than the area had received in one event in months. But it’s not nearly enough to make cotton and will not come close to raising the level of Lake Lugert, the reservoir farmers depend on for irrigation and which currently stands at about 12 percent of capacity.  Farmers have had no irrigation water from Lugert for the past two years and only a pittance the year before that.

As we were celebrating a bit of rain here in Denton I checked weather monitors to see how much rain was falling across the rest of the Southwest. Central Texas picked up some much-needed moisture, as did South Texas. I saw no positive green, yellow or red specks across the Southern Plains, however, and follow-up emails to colleagues and friends in the area confirmed my suspicions. A sprinkle here and there, a promising cloud, a trace across the road but otherwise no rain fell, certainly not enough to make any difference.

I was out that way recently and about two hours before I got to the Caprock I could see a reddish haze on the horizon—dust clouds. By the time I got to Lubbock, the air was thick with soil particles. I was so stopped up that night I slept little.

The following day brought cooler temperatures, a bit overcast in the morning and some low-flying clouds scudding across the sky. By noon, the clouds were gone, the wind was picking up again and so was the temperature. On my way home I marked dozens of dust devils swirling across soon-to-be-planted fields. Where tractors were operating to get land ready, machines were obscured by their self-made dust.

I saw some promising wheat Monday in Northeast Texas; corn and grain sorghum coming up and taking advantage of recent rainfall. It’s not enough to make the crop, farmers said, but it’s a good start.

Conditions across much of the rest of the Southwest are iffy. Wheat will be way off average as drought and freeze damage take huge tolls on production. Drought continues to dominate the nation’s largest chunk of cotton acreage. And no area is immune from the ravages of a drought that some climatologists say might be just getting started. Perish the thought.