Rain over Memorial Day weekend likely means that Missouri farmers will shed planting equipment again for the third weekend in a row. 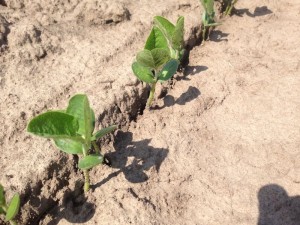 But there is still plenty of time to plant soybean without worries of lower yields, says University of Missouri Extension soybean specialist Bill Wiebold.

Eighteen percent of the state’s corn crop remains to be planted, according to the May 18 USDA crop progress report.

Soybean planting is 16 percent complete in Missouri, woefully behind this time last year and the five-year average of 27 percent. Last year, 30 percent of the state’s 5 million acres of soybean was in the ground.

Row crop planting slowed last week as storms moved through the state. Rain averaged 2.43 inches statewide, with some parts getting up to 5 inches.

Wiebold’s studies show that earlier planting and higher yields go hand in hand most years. Soybean yields decrease 4 percent when not planted by mid-May. By the end of May, yields drop by 10 percent.

That is significant, but not as important as the long-term damage to soil that working wet fields can cause, Wiebold says. Soil conditions, rather than calendar date, dictate when to plant.

The resilient soybean fares better than corn when planted late. “It’s amazing at how good soybean really is at hanging in there,” Wiebold says.

Planting date of soybean affects yield less than environmental conditions in August, he says. Conditions during the first two weeks of August govern soybean pod and seed development, which are determinants of yield.