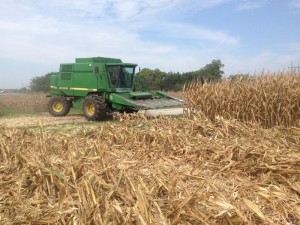 First, a look at production

Based on conditions as of Sept. 1, yields are expected to average 171.7 bushels per acre, up 4.3 bushels from the August forecast, and 12.9 bushels above the 2013 average. Objective yield data indicate the highest number of ears on record for the combined 10 objective yield states (Illinois, Indiana, Iowa, Kansas, Minnesota, Missouri, Nebraska, Ohio, South Dakota and Wisconsin). In total, 18 states expect a record high corn yield for 2014.

Based on Sept. 1 conditions, yields are expected to average a record high 46.6 bushels per acre, up 1.2 bushels from last month and up 3.3 bushels from last year. The September objective yield data for the combined 11 major soybean-producing states (Arkansas, Illinois, Indiana, Iowa, Kansas, Minnesota, Missouri, Nebraska, North Dakota, Ohio and South Dakota) indicate a higher pod count compared with last year as conditions have generally been more favorable across the Midwest. Compared with final counts for 2013, pod counts are up in five of the 10 published states. The largest increase from 2013’s final pod count is expected in Missouri, up 550 pods per 18 square feet. An increase of more than 200 pods per 18 square feet is expected in Illinois.

Supplies, use and prices

The projected season-average corn farm price was lowered 40¢/bushel at the midpoint, to $3.20-$3.80/bushel.

Soybean and product prices were all projected lower for 2014/15. The U.S. season-average soybean