“Compared to the February Ag Forum numbers, this report look a bit more rosy,” says Chad Hart, agricultural economist at Iowa State University. “In February, USDA was projecting an average new-crop corn price of $3.90. This report puts it at $4.20. USDA’s estimated average bean price in February was $9.65. This puts it at $10.75.” 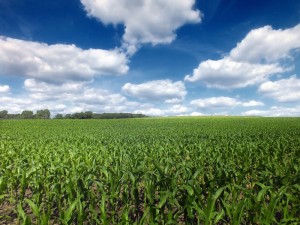 Still, both corn and soybean prices will be substantially lower than the past several years. For corn, higher expected yields this year will offset a reduction in planted area, says USDA. The department expects the U.S. average corn yield to come in at 165.3 bushels per acre, up 6.5 bushels from last year. The forecast assumes normal mid-May planting progress and summer weather.

“USDA is using a really large yield for corn, and they haven’t added in any more acres, says Peter Georgantones, analyst with Roy E. Abbott Futures in Minneapolis. He was the commentator on the post-report MGEX press call. Georgantones expects USDA to eventually add another 1 million to 2 million acres of corn plantings to the 2014-15 balance sheet.

“If any troubles in corn cause USDA to take 10 bushels off the yield estimate, there could be tightness in the corn market pretty quickly,” says Georgantones.

“New-crop carryout caught the market off guard,” Geogantones says. “I can’t get bullish new-crop corn. I am selling into rallies in new-crop.”

Soybeans to Dip Below $10 per Bushel

“The 330 million carryout will do in the market,” says Georgantones. “November beans are at $12.25 now, and they could fall $1.50 to $2 per bushel. We will be buried in beans next fall if we have a big crop this year. I am very bearish beans. They have a long way to fall.”

“Corn production worldwide will be flat,” says Hart. “But in beans we see a sizeable increase in world production of about 6%. Brazil, Paraguay, Ukraine and India, almost everyone is growing more beans with the exception of China.”