The first snow of the season is never a welcome sight, but it’s particularly bad news for farmers in a few states in the Upper Midwest where a significant portion of the corn crop remains in fields.

Parts of South Dakota already have received between 4 and 8 inches of snow, while some areas of Minnesota have seen 11 inches. Snow also has fallen in Michigan — 2 to 4 inches.

The National Weather Service said Monday it expected at least 4 more inches of snow overnight in an area including South Dakota, Minnesota, Wisconsin and upper Michigan. 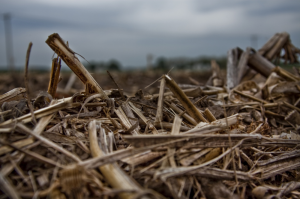 About 10 percent of the corn crop remains to be harvested in Minnesota and 16 percent remains in South Dakota.

Most of the snow is likely to track north of the significant corn-growing areas of Michigan and Wisconsin, said Brad Rippey, a meteorologist with the U.S. Department of Agriculture.

The corn can withstand the cold as temperatures drop below freezing, but deep snow could delay harvest.

“At this point it depends on how much snow actually comes in,” said Chad Hart, an agriculture economist at Iowa State University. “A foot of snow is hard to slog through and tractors might dig in and get stuck in mud. That could mean some delays.”

Farmers leaving corn in fields until the weather improves is not unheard of, but a harvest reduction could come if ears of corn get knocked from stalks or if the cornstalks themselves topple.

Mature corn can withstand cold temperatures and remain in fields for prolonged periods, Rippey said. It may be susceptible to damage from wind, heavy snow and wildlife.

“In some ways, this is an advantage to producers in this year of record U.S. corn production, since leaving the corn in the field is an inexpensive way to dry the crop down without paying to do so and helps to prevent an overload of corn in storage,” he said.

The forecast of more snow was developing as the USDA released its monthly update Monday. The agency boosted the size of this year’s record soybean crop as farmers in several states report per-acre yields surpassing earlier expectations. The corn crop was reduced slightly but still will be a record.

Soybean farmers are now expected to harvest 3.96 billion bushels, up 31 million bushels from the October estimate. Fifteen states including Indiana, Missouri and South Dakota are expected to report records for the amount of soybeans grown per acre with the average yield at 47.5 bushels per acre.

Yields were boosted in six states including Illinois and Iowa. Illlinois has the highest yield expected with 56 bushels per acre.

The corn crop estimate was lowered slightly to 14.41 billion bushels, down 68 million bushels from the October estimate. The adjustment was primarily due to lower yields than previously expected in six states including Iowa, Minnesota and Oklahoma. That dropped the national average yield to 173.4 bushels per acre — still a record high — from the previously expected 174.2.

Still, 22 states including Nebraska anticipate record corn yields. Washington farmers are expected to post an average statewide yield of 215 bushels per acre, and Illinois will average 200.