Rain continues to reign in Missouri’s corn and soybean fields. 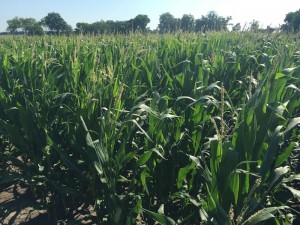 First, temperature is related to the speed of respiration. Warm water speeds respiration, so oxygen is depleted sooner.

Second, fast-moving water creates turbulence, which oxygenates the water slightly. This decreases the impact of flooding, but only slightly.

Third, duration of the flood is important because many of the effects of low oxygen on plants are reversible to a point. Plants generally tolerate flooding for two to three days, Wiebold says, but that’s not to say they go undamaged.

Corn tolerates flooding better than soybean, except when plants are young. In young corn plants, the growing point is near the soil surface, making it likely to be submersed longer. The growing point of the soybean plant is at the tip of the stem and may remain above water.

Flood effects may last long after the water recedes. Soybean plants may turn yellow because nitrogen fixation stops. Corn may show signs of nitrogen deficiency. Sometimes floodwaters deposit silt and residue on leaves. Photosynthesis is reduced until soil and residue are washed from the leaves by a subsequent rain.

Thick claypan soils in northeastern Missouri face the worst drainage problems. The high clay content restricts or prevents the water from moving through the soil, Wiebold says. Only dry days move the water out of the soil.

Prolonged heavy rainfall can cause rivers to rise and block runoff from fields. Rivers and backed-up streams remain above flood stage until water drains through the system. Low areas in fields with slow or poor drainage experience ponding, even if separated from rivers and streams, he says. Ponding usually lasts longer than flash floods because ponded water moves slowly or not at all.

Most damage to plants from flooding or ponding comes from oxygen deprivation. Water in soil (waterlogging) or above the soil surface (flooding) means there is less oxygen for plants to use. Without enough oxygen, the plant grows poorly or dies. In oxygen-deprived crops, changes in respiration can produce several chemicals harmful to the plants.

A soybean crop planted after floodwaters recede can still be profitable, although yields will be lower, Wiebold says. Farmers who plant in July are gambling on a late frost this year. If frosted early, soybean remain green rather than turn a normal yellow. Buyers dock green soybean.