Soybean Farmers Waiting on the Weather

Soybean farmers statewide are waiting on the weather. 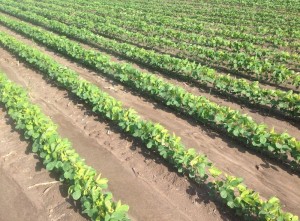 Significant rainfall will affect much of the central U.S. over the next few days, said University of Missouri Extension Commercial Agriculture climatologist Pat Guinan at a May 5 teleconference. Temperatures also are expected to drop to seasonal averages by next week.

Only 5 percent of the state’s soybean crop is in the ground, according to the May 4 USDA crop progress report.

Last week, Missouri farmers took advantage of dry fields to push corn planting to 61 percent complete. With rain in the forecast, they are waiting to fill the planter boxes with soybean.

Soybean planted in the first week of May show increased yields over those planted during the second week, according to a 10-year study by Wiebold. Beans planted by mid-May yielded an average of 70 bushels per acre, with yields dropping to 65 by June 1 and 60 by June 15. Beans planted by July 15 dropped to less than half the yield of those put in the ground in mid-May.

Soybean planted in late April to early May have a better chance of developing vegetative growth that lets the plant collect more sunlight and save more water than those planted later. This increases the plant’s ability to set flowers and pods, resulting in higher yields.

Wiebold says farmers should wait for the right soil conditions before planting. The ever-resilient soybean yields well over a wide range of planting dates.