At a time most years when farmers would be in full swing of planting corn, Stanley Blunier and most other growers near his central Illinois farm still hadn’t begun the annual ritual on Tuesday because fields simply are too wet or too cold to be receptive to fragile seeds. 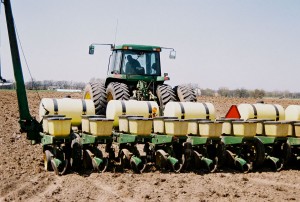 It’s a scenario playing out across much of the nation’s corn belt, where efforts by farmers to get their crops in the ground still are sputtering — similar to last year, when one of the wettest springs on record got farmers in many states off to the slowest start in decades.

The U.S. Department of Agriculture says just 6 percent of this year’s corn crop is in the ground, down from the average of 14 percent over the previous five years at this time. A year ago, with planting conditions as awful as they were, only 4 percent of the seeding was complete.

The struggles now are especially pronounced in key grain states. Illinois has just 5 percent of the crop planted, less than one-fourth of last year’s pace and a sliver of the progress in 2012, when more than half of the state’s corn already was planted by this time.

Iowa — the nation’s corn-growing king — has planted just 2 percent of its fields, lagging from 11 percent last year. Nebraska is at 4 percent.

While Kansas has one-fifth of its corn crop planted and Missouri about one-quarter as two bright spots amid this year’s slow launch, Blunier busies himself by applying herbicide and fertilizer on what portions of his 650 acres of Livingston County corn fields are not too muddy to handle his big machines.

“There are a few guys out nosing around in their fields, planting, but there’s nothing very serious yet here,” said Blunier, 62. “I’d be lying if I didn’t say I’d like to be planting, and if everyone could do what they wanted we’d all be doing it.”

“I don’t know if I’d say this is discouraging. I’m a farmer and know we’re at the mercy of the weather, so we deal with whatever the good Lord gives us,” he added. “It’ll turn around eventually, and when it does a lot of corn will be put in the ground in a hurry.”

Many Midwest farmers won’t be catching a break. Severe weather — packing anything from possible tornados to hail and drenching rains — was forecast from much of the nation’s midsection beginning Wednesday.

Still, Blunier figures he can be patient, partly because he has no other choice: Hustling his machines onto soggy fields to race a crop into the ground could compact the soil, foiling the seeds’ effective sprouting and ultimately costing him yield.

The USDA says corn planting traditionally hits its stride between now and May 23. And today’s bigger, more efficient planting machines can make up for lost time — something reflected last year in Illinois, when more than 40 percent of the state’s corn crop got planted in just one week in mid-May.

And the agency notes that even with last year’s frustratingly slow start to planting, U.S. farmers still reaped a record 13.9 billion bushels of corn and the third-biggest soybean crop on record.