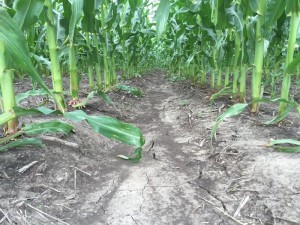 With heavy rains forecast for the next several days, that won’t change.

“The weather forecast doesn’t bode well for Missouri farmers,” Wiebold says. As much as 5 inches of rain are predicted for the next several days. Then Tropical Storm Bill will move from Texas into Missouri with additional heavy precipitation.

As of June 14, only 42 percent of intended soybean acres were planted in Missouri. Farmers to the north and east of Missouri have planted more than 90 percent of their planned acres.

The Missouri Climate Center (http://agebb.Missouri.edu/weather/river.htm) lists river and stream floodings, and they are plentiful.

The USDA National Agricultural Statistics Service’s nine Missouri districts report different frequencies of rain events. “The eastern side of the state had had a few—very few—more days of planting opportunity than the western side,” Wiebold says.

The “best of the worst” progress is in the southeastern, eastern and northeastern districts. “Regardless of location, soybean planting lags normal and yield potential has been reduced,” he says.

Wiebold conducted 12 years of experiments in central Missouri that show how yield correlates to planting date. “Soybean yield is highly related to weather conditions during August, and yield variability among years for June-planted soybean was large,” he says.

More than 3 million of Missouri’s estimated 5.65 million soybean acres have yet to be planted.

2015-06-19
Derek Fox
Share !
Previous: Make the Most of Late-Planted Soybean
Next: Scouting for Pressure