Farmers might need to get a bit defensive with marketing strategies in the next few years as bull grain markets begin to disappear. 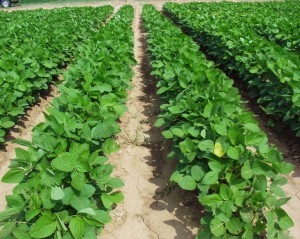 A stagnant ethanol market, large corn ending stocks and weak economic growth in the United States and worldwide, among other issues, are putting the U.S. ag industry in a situation that has not been the norm for several years.

Normal weather and increased corn productions will mean lower prices, Wiesemeyer said. “How low it goes will depend on carryover buildup.” Even if the current corn crop misses production estimates, the carryover will be 1.4 billion to 1.6 billion bushels for the 2013 crop. “That’s not bullish.”

Globally, corn production jumped 11 percent to a new record. Soybean production is also up by 5 percent with the United States the biggest producer, taking top spot from Brazil. “But Brazil and Argentine production combined is still larger than U.S. production by far.”

Wheat sees a “slight decline in global ending stocks.” But with corn prices likely declining, some wheat that has been going to the feed market will be replaced by corn, Wiesemeyer said. “But a wheat price decline was moderated by a large market share during the summer. And weather issues keep the wheat market fuzzy.”

The corn and soybean market could be affected by frost on what is expected to be a late harvest.

Wiesemeyer says average yields are improving as technology introduced into crops some seven years ago begin to show an effect. “Look for a jump in yield around 2015,” he said.

Among advances, he cited new planters that allow producers to seed multiple varieties in one pass. Specific varieties may be placed on different soil types to improve productivity. “We expect more production at a lower cost.”

He said land values also will go down, “not as much as they did in the 1980s but still down.”

Livestock will benefit with lower grain prices. “The baton will be handed off to livestock,” beginning with poultry. “The hog industry will begin to expand later this year and cattle will take longer.”

Other issues also will affect agriculture’s bottom line in the months and years ahead.

Gasoline prices could also decrease, but questions often come with any energy speculation. “Energy production is up and use is down across the world. Better fuel economy is one reason. Also, Baby Boomers are retiring so they are not driving as much. That all means less gas usage.”

Increased U.S. production of natural gas “is the biggest mega change in energy in years,” he added. “Farm equipment will soon change to natural gas.”

Fertilizer prices are down.

So, are we looking at lower energy prices? “Well, we can limit the upside potential,” Wiesemeyer said. “If the Syria issue is resolved the right way we should watch to see how fast energy prices come down.”

He said he is hesitant about predicting energy prices. “We always have wild card countries like Syria, Iran and others.”

He said the biofuels market has hit the blend wall. “The market is constrained by declining gasoline usage. The blend wall is stagnant and E-15 and E-85 expansion is limited. Also, exports will not recover to 2011 heights and import of Brazil sugarcane ethanol is on the rise.”

Wiesemeyer expects Congress to adjust the Renewable Fuels Standard. “I think we will see a lower mandate level. The final rule comes out in June, 2014.”

The Transpacific Partnership trade pact “could be significant for agriculture because of the inclusion of Japan,” he said.

In other trade issues, he said the president needs fast-track trade authority to be effective with free trade agreements but Congress likely will not give the Obama Administration all it requests in fast track authority.

Finally, Wiesemeyer said the U.S. agriculture industry needs a farm bill and a safety net with target prices. “Market changes likely in 2015 or 2016 indicate the need for a safety net. We will need target prices to deal with the downturn.”

He said he’s never seen “Washington DC as ineffective, in both parties. In most countries, we would have seen a third party rise. Watch for that.”

In the meantime, he cautioned producers to use “defensive marketing strategies in the years ahead.”

Previous: 2013 is Another Drought Year
Next: Nearly 17 Percent of Missouri in ‘Severe’ Drought