The U.S. Department of Agriculture on Monday (Aug. 12) predicted the nation’s largest corn crop in history and the third largest soybean crop – a stark contrast from a year ago when crops were devastated by drought. 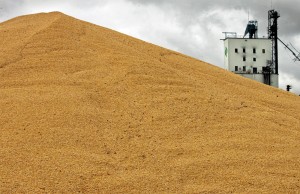 In its annual August crop production report, the USDA’s National Agricultural Statistics Service projected a national corn crop of 13.8 billion bushels on 154.4 bushels per acre – a 28 percent increase over last year’s 10.7 billion bushels. The previous record was 13.09 billion in 2009.

The drought reduced last year’s corn harvest to its lowest level since 10 million bushels in 2003, and the average bushels per acre was the lowest since 113.5 in 1995.

“To say what a difference a year makes is a huge understatement. It’s a big difference this year,” said Jay Akridge, Glenn W. Sample Dean of Purdue Agriculture, at the Indiana State Fair, where a panel of agricultural experts analyzed the report, which offers the first look at expected harvests for 2013. Purdue Extension organized the panel.

Akridge, who moderated the panel, noted in his opening remarks that the report “sets up potential for a huge crop.”

“We have a lot more grain this year, which will get much of the industry back to work,” Hurt said. “The much bigger crop has producers and agronomists smiling, but the economists are not smiling. A larger crop means lower prices.”

While those lower prices could mean lower farm incomes, they also could offer some good news to food consumers. Prices of raw ingredients will be down, meaning retail food-price increases could moderate to less than the rate of inflation, Hurt said.

In Indiana, USDA expects corn farmers to produce just shy of 1 billion bushels at 979.4 million, compared with 596.9 million bushels in 2012.

About two-thirds of the state’s corn is rated good to excellent, which is welcome news to growers this late in the season, said Nielsen, corn specialist.

“Half of Indiana’s corn crop was planted after the 15th of May, which is the third latest in the last 10 years,” he said. “But we’ve learned that the planting date is not always a direct predictor of yield.”

According to Nielsen, Indiana corn development is about 1-2 weeks behind schedule, but moderate temperatures and timely rainfall meant the crop pollinated with little environmental stress.

“Right now, soybean development is about a week behind, but we are set for good seed fill if we get the weather to finish it out,” Casteel said.

In fact, with continuing moderate temperatures and timely rains, Hurt, Nielsen and Casteel agreed that yields could be higher than what USDA is predicting – especially since the department’s numbers are based on grower surveys compiled before Aug. 1.

“This creates an opportunity to create value for the state of Indiana, ” Sheets said.

Previous: Timing for Fungicide
Next: Are Poor Yields Due to Short Drought Periods a Thing of the Past? We Think So!