Scharf showed how crop sensors diagnose variable nitrogen needs at a recent farmer technology field day at MU’s Bradford Research Center. In the last decade, on-farm demonstrations have been carried out in more than 100 cornfields and a dozen cotton fields in Missouri. 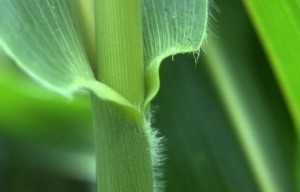 Nitrogen needs can vary widely from place to place within a field, Scharf said. In multiple field-scale studies, Scharf found that applying nitrogen at the same rate to an entire field often means that more than half the field will receive either far too much or far too little nitrogen.

Tractor-drawn light sensors can measure nitrogen levels in plants by detecting the amount of pulsed light that bounces back from plant canopies. A computer in the tractor cab uses the sensor data to automatically adjust fertilizer rates.

“Sensors take advantage of what all crop producers know from experience and common sense: Crops with enough nitrogen are darker and taller than those that are deficient,” Scharf said.

In 55 on-farm demonstrations with side-by-side comparisons between sensor-based nitrogen rates and producer-chosen nitrogen rates, sensors averaged a savings of 14 pounds of nitrogen per acre. Yield increased by 2 bushels per acre. “There are a whole bunch of fields over- and under-fertilized,” he said.

“Putting less where less is needed will save money and reduce nitrogen loss from the field to water. Putting more where more is needed will increase yield and the efficiency of all the other production inputs.”

The technology still has some limitations: Not all controllers can accept external rate-control commands. Values can drift during the day. Weather and logistics present challenges. Producers and equipment manufacturers continue to work to improve variables.

Using sensors, corn should not be side-dressed until it is at least 12 inches tall. Producers should have a backup plan for nitrogen application in case of adverse weather. This requires availability of high-clearance or aerial application. Producers might choose to use sensors only on fields with the most soil variability to reduce the risk of not finishing N applications before the corn is too tall to drive a tractor through the field.

Crop color is one of the most accurate ways to judge nitrogen needs, Scharf said. His studies shows that chlorophyll meter values are at least twice as accurate as the best soil test. Aerial photographs also can be used but may be expensive and depend upon weather.

Returns on investment for the equipment depend on corn and nitrogen prices. Equipment costs $15,000-$20,000; at current prices, returns were $15 per acre in his study. It would take about 1,000 acres with similar results to pay for the sensors. He uses several brands of the sensors and does not recommend one over another. He said all manufacturers are making improvements.

Scharf said MU researchers are leading studies on sensors and nitrogen management, but other Midwestern universities are researching the topic as well. “Interpretations still vary greatly,” he said. “Move forward with your eyes wide open.”