Weeds May Cause 40-Percent Yield Loss in Wheat

Controlling weeds in wheat may never have been particularly easy, but increasing pressure from herbicide-resistant weeds makes the chore a bit more complicated. 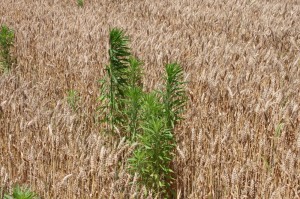 “Know the enemy is the first,” he said. Identifying the weed species is essential to select the correct herbicide, cultural practice, rotation option and application timing to achieve effective control.

“An ounce of prevention is worth a pound of cure,” he noted as No. 2 on the list. If weeds never get started, they can’t overtake and overwhelm management practices, and they don’t steal valuable nutrients and moisture from the wheat crop.

“Follow integrated pest management principles,” is No. 4 on his list. He says spending time with the crop, observing growth stage, nutrient and moisture demands and identifying any disease, insect and weed pests that may be encroaching reduces the potential for crop loss.

No. 6 is timing. “Timing is critical,” Drake said. Waiting until weeds are too large or allowing resistant weeds to remain in the field and go to seed make weed control much harder than it needs to be.

Weed control is a critical factor for wheat producers. “Weed infestations can result in up to 40-percent-yield loss. Weeds compete with the crop, especially for moisture in this area,” Drake said.

Riding by uncontrolled patches of Johnsongrass in wheat fields “makes me cringe,” he says. “We’re going to need that moisture this fall.”

In addition to stealing moisture and nutrients, weed seed contaminate harvested wheat and lower the price farmers receive for their grain.

Producers should look at herbicide labels, especially to determine the mode of action. “Look at the box on the label that shows ‘group,’” he said. “That’s the mode of action, and that information helps manage resistance. Using only a specific herbicide will result in a ‘weed shift.’ Glyphosate, for instance, selected for pigweed and now growers have to change practices to deal with resistant pigweed.”

He said producers can be fairly sure they have a resistance problem if they find that even a heavy rate of glyphosate does not control a specific weed. “But it’s more than just a glyphosate problem. We have many herbicide-resistant weeds, including 21 currently labeled resistant to glyphosate.” Other resistant weeds include Kochia, horseweed, Johnsongrass, Russian thistle, perennial ryegrass and cactus.

“Use a different product or tank mix,” he said, to control resistant weed populations.

Herbicide resistance, he added, threatens to reduce efficacy of proven herbicides. “Glyphosate was close to a silver bullet. It was a broad spectrum herbicide, pretty safe to use, and easy to use. We need to preserve it. It was also cheap.”

A few new products are coming along. Sharpen, Drake said, is effective on Kochia and Russian thistle. “It will have a place.” Clearfield wheat, in combination with Beyond herbicide, offers another approach to weed control. Target species include grassy weeds such as feral rye, downy brome, and jointed goat grass. “Feral rye is difficult to control in wheat,” Drake said. “Rotation is important, and it’s almost impossible to control in monocrop wheat.”

Clearfield and Clearfield-plus varieties are available, he said. These are not genetically modified varieties but mutations “found in a wheat strain that did not respond to Beyond herbicide. It’s genetic selection.”

Regardless of the variety or the weed species likely to infest wheat, Drake says control is an essential function to prevent yield loss and to eliminate dockage at the elevator.